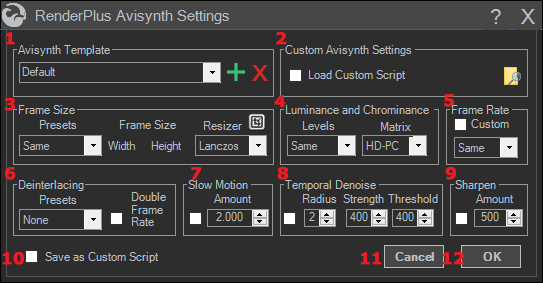 The RenderPlus Avisynth Settings dialog enables the user to apply a number of Avisynth filters which are applied during the final render.

2. Custom Avisynth Settings.  If "Load Custom Script" is checked, the search folder icon is enabled and you may load a "custom" avisynth script created elsewhere.  You will see that the remaining info boxes are disabled.

3. Frame Size.  The dropdown list provides some of the more common frame sizes.  If "Custom" is selected, frame width and height may be entered directly into the textboxes. 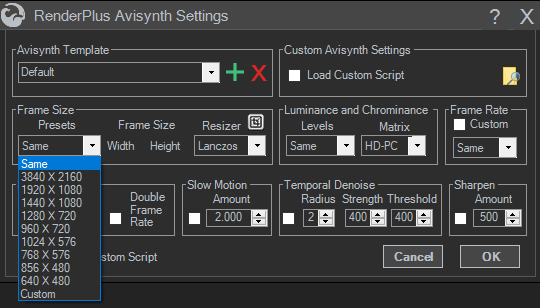 If anything other than "Same" is selected, the Resizer dropdown list is enabled permitting the user to select the resizing algorithm to be used.  The default is Lanczos. If the button

is clicked, a Crop Resize dialog opens which enables the user to crop and/or resize the rendered file.

4. Luminance and Chrominance.  Dropdown boxes permit the user to apply levels changes (E.g. PC>TV which is the same as the Computer RGB to Studio RGB preset in the Levels Fx.) and whether to apply HD (BT709) or SD (BT601) matrices.

5. Frame Rate. Dropdown box permits the user to render to a different frame rate.  Frame rate conversion makes use of MVTools, a collection of functions for the estimation of an objects motion in a video clip.  Specifically, it uses the MFlowFps function as a means of creating interpolated "new frames" between the original frames. If the Custom checkbox is ticked, the user can enter a non-standard frame rate such as 16 fps for 8mm film.

6. Deinterlacing.  Permits deinterlacing using QTGMC, a very high quality de-interlacer.  The dropdown list provides a number of presets affecting both speed and quality.  If Ultrafast is selected, the Yadif de-interlacer is used.  The default setting is considered "medium".  QTGMC is a bob deinterlacer which by default doubles the frame rate.  For example, if "Double Frame Rate" is checked, the resulting frame rate from an HDV 29.97 fps source would be 59.94.  If unchecked, the frame rate remains at 29.97 by discarding every other frame, which also halves the temporal information.

7. Slow Motion.  Slow motion effects are created using the same tools used in changing frame rates.  If checked, a slow-motion effect will be applied to the rendered file. The amount of "slowing" may be selected using the numeric up-down control. The default settings 2.0 which means the rendered file will be double the length of its source. Slow-motion maybe applied in concert with framerate changes. No changes to the audio will be applied. The maximum value is 10.0.

8. Temporal Denoise .  If checked, the  MDegrain  temporal denoising function will be applied.  The user first selects the function's temporal radius; that is, the number of previous and future frames that are to be analyzed for each frame.  Selecting of radius of 1, 2, or 3 will call MDegrain1, MDegrain2, or MDegrain 3 respectively.  There are two other numeric updown controls.  The first, labeled "Strength" is ThSAD and the second, labeled "Threshold" is ThSCD1.  The default values for each are 400.

9. Sharpen.  If checked, a final sharpening will be applied using the LimitedSharpenFaster filter.  It sharpens edges and fine details while attempting to control halos and minimizing artifacts.  The default value is 500.

10. Save as Custom Script.  If checked, the internally-generated Avisynth script can be saved for use in AviDub. A textbox will appear wherein the name of the saved script may be entered.  It will be saved in the default Avisynth Scripts folder.

11. Cancel.  Returns to the main RenderPlus dialog without saving any changes.

12. OK.  Saves the changes and returns to the main RenderPlus dialog.  If changes were made, but no new template name entered, the changes will still be saved, the name being <Unsaved>.

Copyright 2020 - HappyOtterScripts by The Happy Otter