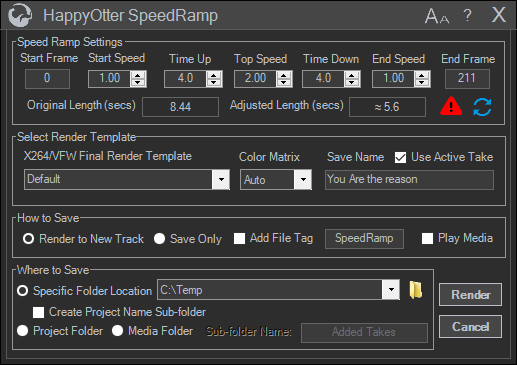 SpeedRamp is a tool that enables the user to speed up and slow down both the video and audio track together so that audio sync is maintained.  Note that speeds may be increased to "speed up" the video or decreased to "slow down" the video.  To use SpeedRamp the following steps are required:

1. Create a timeline event to which the SpeedRamp will be applied.
2. Optionally, create a selection loop within the event to indicate specific frames when the "ramp up" starts and when the "ramp down" ends.  If no loop is found, "ramp up" starts with the first frame of the event and "ramp down" ends with the last frame of the event.
3. Select the video event and audio tracks that will be included.
4. Launch SpeedRamp.

b. Start Speed. Playback speed at the time of the start of the speed change.  The default is 1.0 which corresponds to "normal" playback.  Values greater than 1 increase speed while values less than 1 decrease speed.

c. Time Up.  The length of time in secs in which the speed of the video will be gradually increased (or decreased if Top Speed is less than 1.0).

d. Top Speed.  Playback speed once the gradual increase (or decrease) has been applied.  Values greater than 1 increase speed while values less than 1 decrease speed.

d. Time Down. The length of time in secs in which the speed of the video will be gradually decreased (or increased if Top Speed is less than 1.0).

e. End Speed. Playback speed at the time of the end of the speed change.  The default is 1.0 which corresponds to "normal" playback.  Values greater than 1 increase speed while values less than 1 decrease speed.

h. Adjusted Length. Adjusted length in seconds.  Note that the times are only approximate.

a. X264/VFW Final Render Template.  Dropdown list of render templates that may be selected.  Note that the only permitted formats are avc (h264) or avi (MagicYUV or UtVideo).  New render templates can be created using RenderPlus or other tools such as AviDub or RenderEvents.

b. Save Only.  If selected, the rendered file will be saved but not added to the timeline.

c. Add File Tag.  If ticked, a file tag will be added which is any additional text that you want to  be included in the rendered file name. A new name can be entered into the textbox.

d. Play Media .   If checked, the rendered file will be opened in Media Player Classic - Home Cinema for immediate playback. A complete description of this dialog may be found in  OtterPlay . Note, however, that the Play Original and Split-Screen options are not available and grayed out.

c. Sub-folder of Media File Folder.  Rendered media files are stored in a sub-folder in the  folder where the media file is located.  The name of  the sub-folder may be entered into the textbox on the right. This option is available only for event renders.

6. Cancel.  Exits the script.  Note that any changes to the SpeedRamp dialog will still be saved.

Copyright 2020 - HappyOtterScripts by The Happy Otter