SmartVideoTrim (SVT) is designed for frame accurate trimming of video files with long GOP formats.  Trimmed files are exact copies of the original with no re-rendering.  They may be added back to the timeline as a Take or an event on a new track.  Frame accuracy is achieved by an image comparison of the first frame of the original event on the timeline with individual frames of the trimmed file.  Once an identical match is found, an offset is calculated and the event is added, thus ensuring frame accuracy.  There are also options to keep the same or change containers.  When possible, metadata from the original file will be copied to the trimmed file.

a. Use Auto Settings.  If checked, SVT will estimate the number of head and tail frames necessary to find a match.  If unchecked, the user may apply Custom Settings (#2) by choosing his own Head and Tail frames to be added.

b. Skip Time in Seconds.  Event will be skipped if the difference between the length of the media file and length of the event is less than or  equal to the number of seconds entered.

c. Copy Skipped Events.  If Render to New Track is selected (#8), skipped events will also be added to the new track.  The media file will also be copied to the Trimmed Files destination folder (#9). 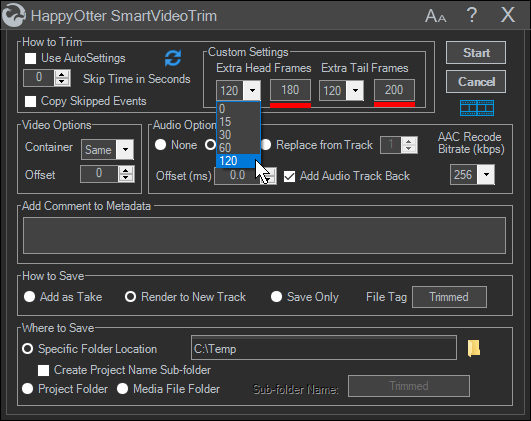 4. Cancel. Closes the GUI without trimming.

Launches Otter NavBar  which permits the user to navigate the timeline, select tracks and events, and set in and out points for render loop.

a. Container.  A drop-down list with container options which include Same, mov, mp4, m2t, and m2ts.  WARNING!  By far, the safest option is to keep the container the same.  While FFmpeg will readily change containers, the results may not be decoded back in Vegas.  For example, if you want to change an m2ts file with ac3 audio to mp4, FFmpeg will do that without issue.  However, Vegas will not decode the resulting audio.  In such cases, the ac3 audio will be transcoded to aac so that the resulting media file can be imported back into Vegas.

b. Offset.  The number of frames to be trimmed from selected event on the timeline.  To be used only if there are no head frames and the user wants to trim frames from the  start of the videostream.  This can be useful if the recorded media (E.g. some GH4 footage) does not start with an I-frame.

a. None.  No audio.  Only the trimmed videostream will be saved.

b. Keep Audio . If checked, the audiostream will also be saved.

d. Offset. Number of milliseconds to be added or subtracted  to compensate for out-of-sync problems which can often be found when changing containers using FFmpeg.

e. Add Audio Track Back. If checked, SVT will add new audio track to the timeline if Render to New Track is selected or adds a take to the audio event if Add as Take is selected.

8. Add Comments to Metadata.  For certain formats such as MP4 or MOV, entered text will be added as metadata to the trimmed file and can be seen as Comments in the app MediaInfo.

c. Save Only . If selected, the rendered trimmed file will just be saved.  It will not be added back to the timeline.  WARNING. No synchronization between the trimmed file and timeline event will occur.

10. Where to Save. There are three options.

b. Sub-folder of Project Folder. Rendered media files are stored in a sub-folder in the  folder where the Vegas project is located.  The name  of the sub-folder may be entered into the textbox on  the right.

c. Sub-folder of Media File Folder .  Rendered media files are stored in a sub-folder in the  folder where the media file is located.  The name of  the sub-folder may be entered into the textbox on the right.This option is available only for event renders.