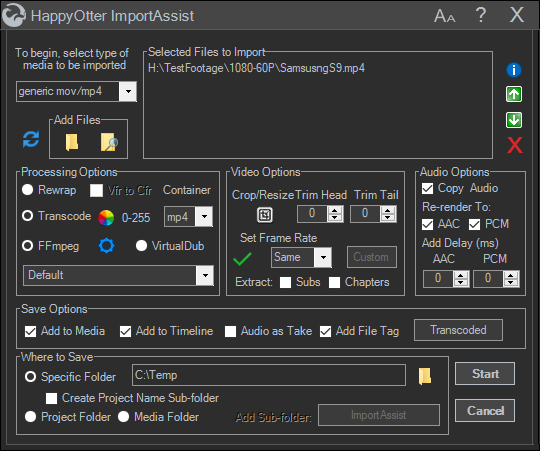 A script for either re-wrapping or transcoding media files into a format that can be more easily decoded on the Vegas timeline.  If re-wrapping is possible, the media file's videostream and audiostream remain unchanged.  These are placed into a new container which can then be decoded by Vegas.  Transcoding involves the re-rendering of the media file's videostream and audiostream into a format that can be better decoded on the Vegas timeline.  Ideally, a lossless VFW codec such as UtVideo or MagicYUV should be used for the videostream, but this can result in very large file sizes.  Transcoding options include direct x264 renders as well as VFW codecs such as Cineform using VirtualDub.

1. Type of Import. A drop-down list of media for which a transcoding or rewrapping option is available. 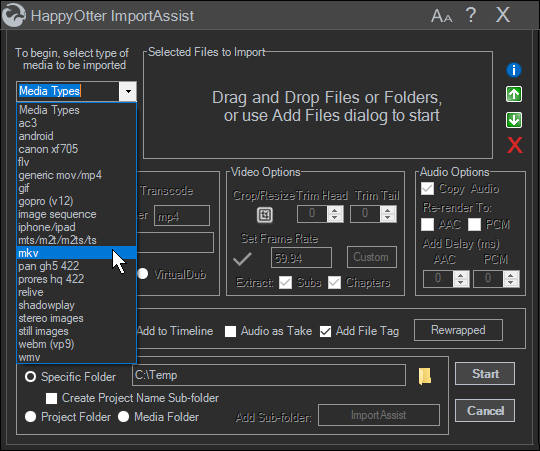 to remove all files, selections, and to start over.

3. Selected Files to Import . An info box  which  shows the list of files to be processed.

If clicked, detailed stream information will be shown. 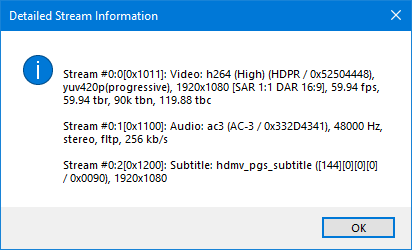 Moves the selected items up in the listbox.

Moves the selected items down in the listbox.

Removes the selected media files from the listbox.  Note that it does NOT delete the file from your hard drive.

b. VFR to CFR . For MKV, MP4 and MOV containers, a rewrapping option is available which enables the conversion of Variable Frame Rate (VFR) video to a Constant Frame Rate(CFR) which Vegas prefers.  This can be especially useful for cell phone and tablet video recordings which usually record using VFR.  There is no transcoding of the video stream.  Only the timecode is changed. For MKV containers, the VFR to CFR option is selected by default.

For 8bit x264 renders using FFmpeg, clicking this icon button toggles between full-range (0-255) and limited-range (16-235).  This option is not available when using 10bit x264 rendering.

c. Container . A drop down list of possible containers.

e. FFmpeg.  If selected, the drop down list will show a list of available render templates.  For x264 encoding, new templates can be created using the Encoder Settings dialog.

When clicked, the following x264 rendering template window is shown.  Note that the same window can be loaded when x264 rendering is selected in AviDub, ProxyAssist, and RenderEvents.  Templates created in one script may be used in other scripts as well.  A complete description of this window may be found in the help section describing x264 Render Templates in detail. 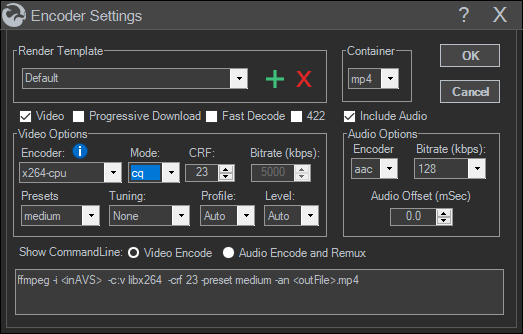 g. VirtualDub. If selected, the drop down list  will show a list of available VirtualDub render templates.  New templates can be added by launching VirtualDub from OtterBar or OtterInfoBar and creating and saving new compression settings files.

If clicked, a crop settings dialog open which enables the user to crop the incoming media file. 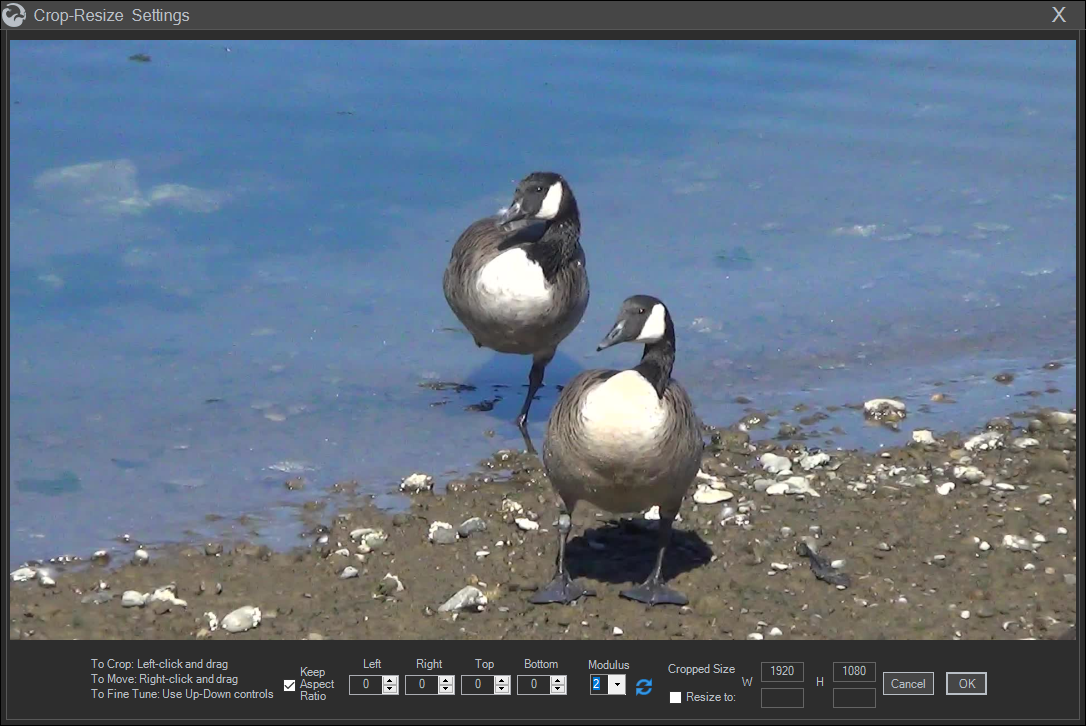 b. Trim Head .  The number of frames to be trimmed from the beginning (head) of the media file.

c. Trim Tail .  The number of frames to be trimmed from the end (tail) of the media file.

d. Set Frame Rate. A dropdown list of available frame rates for the transcoded files.  If custom is selected, the frame rate may be entered manually.

e. Extract . If selected, subtitles and chapters may be extracted from MKV and MP4 files.

(1) Subs.  Subtitles (subrip) can be extracted from the media files and will be saved as files with a .srt extension.  They cannot be directly added to the Timeline using HappyOtterScripts.  To add these to the timeline, it is recommended that the Text Generation Wizard in Vegasaur be used.

a. Resizing to either a custom width or factor of the project width.

If selected, the following crop dialog is shown. 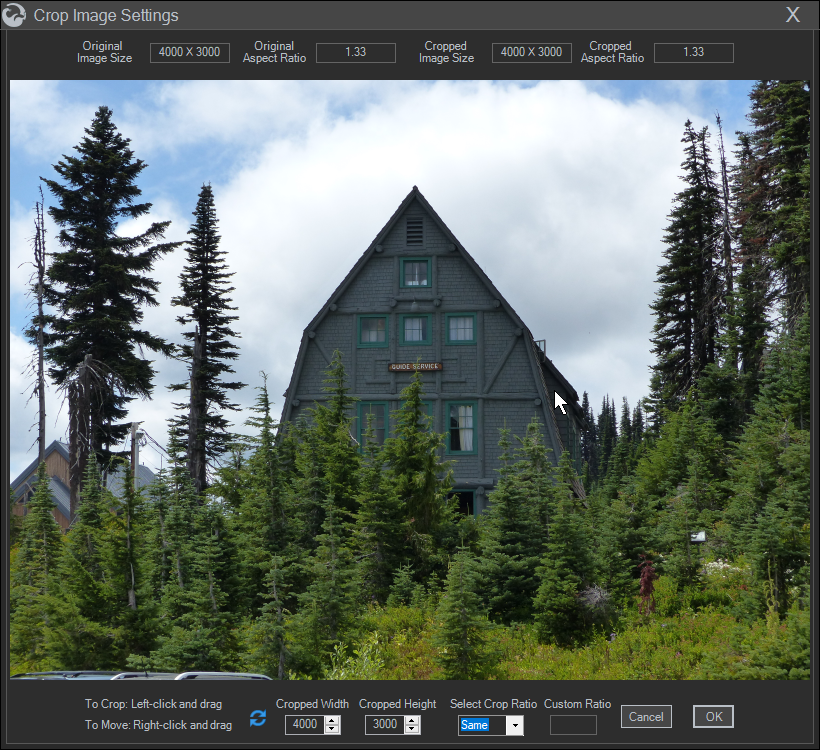 c. Length.  Event length if added to the timeline.

e. Small Image Import.  If ticked, a small image can be imported and placed on a transparent background corresponding to the project dimensions.  This enables small images to be imported to the timeline without the "zooming" that normally occurs when such images are added directly to the timeline.

a. Copy Audio . If checked, the selected audio streams wills be copied and rendered to new audio files.

(1) AAC . Selected streams will be re-rendered to the aac format at a bit rate of 256K

a. Add to Project Media.  If checked, the transcoded or rewrapped files will be added to project media pool.

c. Add File Tag. If checked, a file tag will be added which is any text the user wants added to the name of the rewrapped or transcoded media file.  Two separate file tags are possible--one for Rewrapped media and another for Transcoded media.

8. Where to Save . There are three options.

c. Sub-folder of Media File Folder.  Rendered media files are stored in a sub-folder in the  folder where the media file is located.  The name of  the sub-folder may be entered into the textbox on the right.This option is available only for event renders.

10. Cancel. Exits the script without processing.