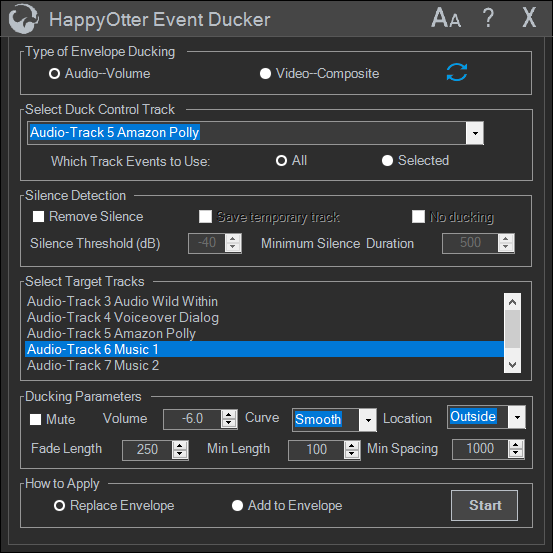 Event Ducker is a tool that enables the user to control both an audio track's Volume envelope and a video track's Composite envelope.  Generally speaking,  "ducking" is a term that is applied to audio.  Ducking temporarily reduces the volume (ducks) based on the presence of another audio signal.  For example, during a voice over, the volume of the music track is reduced whenever speaking occurs and returns to its original volume during periods of silence.

a. Audio-Volume. Volume envelopes will be created and used for selected target audio tracks.

b. Video-Composite. Composite envelopes will be created and used for selected target video tracks.

Reset to Default Settings.  Returns the GUI to its default script settings.

2. Select Duck Control Track. The user must select which track will be used for the control of ducking.

a. Drop Down List of Tracks.  List of all audio and video tracks, except for those tracks containing no events.

b. Which Track Events to Use.   Select which track events are to be used for ducking control.  All events on the track or only selected events may be used.  Note that for each selected event, ducking on the target track will begin and end with the start time and end time of the event, as modified by the location and length of the fade.

3. Silence Detection.  If the duck control track is an audio track, there is an option to detect the silent portions of that track and create a new track with the silence removed.

a. Remove Silence.  If ticked, silent portions of the selected track will be removed.  The selected audio track is first copied to a temporary track and rendered to a lossless wave file, which is then used for silence detection processing.  After processing, the silence portions are removed and the resulting track events will be used for ducking.

c. No ducking.  If ticked, there will be no duck processing.

d. Threshold.  Sets the volume  level in decibels, below which, the audio file will be considered "silent".  The default is -40 dB.

a. Volume.  The amount of audio ducking that will be applied to the Volume envelope.  Possible values can range from -60 dB which is complete silence to +6 dB which increases track volume by 6 dB.  The default is -6 dB.

b. Opacity.  The amount of opacity reduction that will be applied to the Composite envelope.  Possible values range from 100% opacity to 0% opacity which is black.  The default is 100%.

c. Curve.  Drop down list of curves that can be applied to each envelope point which include Smooth, Fast, Linear, Sharp, and Slow.  The default is Smooth.

e. Mute.  If ticked, the values of Location and Fade Length are set so that the resulting envelope points are the same as if a Mute envelope had been applied.  This enables a combination of both ducking and muting using the same track envelope.

f. Fade Length. Length of fade in and fade out in milliseconds.

g. Minimum Length.  The minumum length of the event in milliseconds.  Events shorter than this duration will be be ignored.

h. Minimum Separation.  The amount of time between events necessary for fade in or fade out envelope points to be added.  The default is 1000 msec or 1 sec.  In other words, if the distance between the end of one event and start of the next event is less than 1 sec, a fade out and fade in will not be applied to those events.

a. Replace Envelope.  If selected, envelope points from an existing envelope will first be removed.

b. Add to Envelope . If selected, envelope points will be added to an existing envelope, thus enabling the user to simply add points.  Note, however, that any existing points that are contained within the range of points to be added (start of fade in to end of fade out) will first be removed.