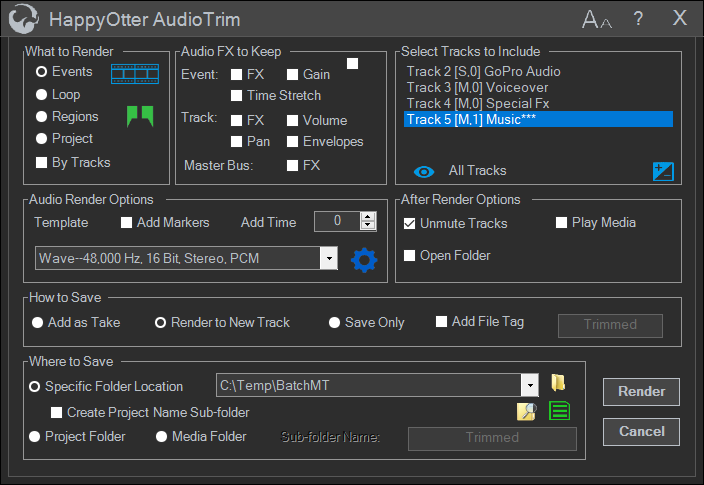 A script designed to render and trim audio events.  It can be especially useful for audio from an external recorder.  Once synced, it can be added to the original event as an audio Take, thus ensuring the external audio remains in sync with the original.

a. Events .  Multiple events may be selected from a single track.

Launches Otter NavBar  which permits the user to navigate the timeline, select tracks and events, and set in and out points for render loop.

c. Loop region .  If selected, the loop region will be rendered to a New Track.  The tracks to be rendered must be selected in the Select Tracks box.

d.  Regions .  If selected, all regions will be rendered to a New Track.

e. Selected Regions.     Opens a dialog where the user may select which regions to render.  Region names may be directly entered or edited and will be saved in the project. 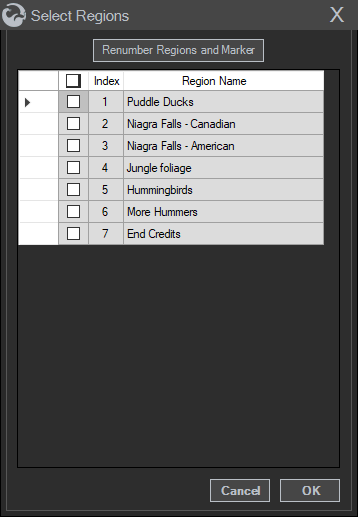 f. Project .  The entire project will be rendered.

g. By Tracks .  If ticked, Loop region, Regions or Project renders will be performed separately for each selected track.

2. Audio FX to Keep.  The user may specify which audio FX should be kept.  During render, those unchecked FX will be temporarily disabled.  Upon render completion, they will be re-enabled.

3. Select Tracks to Include: The user may specify which audio tracks should be included in the render. Inside the brackets, an S indicates a stereo track while an M indicates a mono track.  The number indicates the number of selected events on the track.  A track with *** indicates it to be the one with selected events.  If another track is selected, it may then be added as a Take to the selected event, useful to add audio from an external recorder to the original audio from the camera.

Toggles between showing All tracks, only Stereo tracks and only Mono tracks.

Selects/deselects all tracks shown in the window.

a. Set Vegas Audio Out Template.  If checked, the user may choose a different render template.

A left-click on the blue gear icon opens an audio render dialog from which a new audio template may be selected.  When selected, the new template will be shown in the textbox. 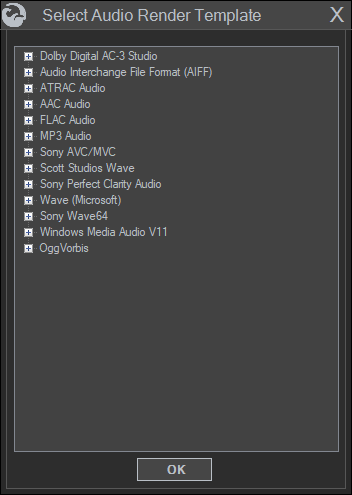 b. Add Markers .  If ticked, project markers will be added to the rendered file for those formats that support the insertion of media markers such as Wave files.

c. Add Time. The number of seconds added to the head and tail of each audio event.  This option can be used only if a single track is selected.  It is useful for trimming a long audio file and keeping only those portions within the selected event.

a. After render unmute tracks.  During the render, those tracks that are not be included will be muted.  If checked, all tracks will be unmuted upon render completion.

6. How to Save.  There are three save options that partly depend upon what is being rendered. In all cases, existing files will not be overwritten.  In the event a file already exists, a numerical suffix will be added to the file name.

b. Render to New Track. This options is available for all types of renders.  If selected, the rendered file will be added to a new track entitled "Trimmed Audio".

d. Add File Tag.  If checked, a File Tag will be added to the name of the rendered event. The desired name can be entered in the textbox.

7. Where to Save . There are three options.

a. Specific Folder Location .  Rendered media files are stored in a specific folder selected by the user.  A left-click on the folder icon

opens the browse folder dialog from which the location is selected or a new folder created.  Previous saved folders are shown on a dropdown list.  To remove a saved folder, right-click and click on "Yes".   If "Create Project Name Sub-folder" is checked, a sub-folder will be created in that location with the name of the subfolder being the Project name.

c. Sub-folder of Media File Folder.  Rendered media files are stored in a sub-folder in the  folder where the media file is located.  The name of  the sub-folder may be entered into the textbox on the right. This option is available only for event renders.

Opens the selected save folder in File Explorer.

Opens the File Renaming Setup dialog where the user can customize the name of the rendered file.  Click here   for detailed information.

9. Cancel. Exits the script without rendering.